What if I’m partially at fault in a car accident?

Even if you were partially responsible for causing a car accident in St. Louis, you may still be able to seek compensation for your injuries from another negligent driver. However, the amount of compensation you receive depends on who is more at fault according to Missouri’s comparative fault rules. Learn more below, and then contact the experienced St. Louis personal injury attorneys at Combs Law Group by calling (314) 900-HELP.

What is Comparative Fault in Missouri?

Comparative fault is a legal rule in Missouri in which each defendant is only liable for his or her percentage of fault (out of 100%) in an accident and that determines the amount of damages they are able to receive. Most states use this system in personal injury cases: however, Missouri is what is called a pure comparative fault state. This means that any driver could potentially claim damages after an accident. Other states, such as Illinois, use a modified comparative fault system where only people who were less than 50% responsible for accidents can claim damages.

In other words, if your own negligence contributed to the crash you were involved in, you will not be entitled to all the compensation that you would’ve received if you’d been completely blameless. However, you are entitled to some recompense, but it would simply be reduced by your percentage of fault in causing the crash. For example, a jury could find you to be 30 percent at fault in the accident and thereby will reduce your total amount of damages by 30 percent.

Here is a more extensive example to help you understand. Let’s say you were following behind a car driven by a man talking to his wife on a cellphone. He slams on the brakes because he wasn’t paying close enough attention and following too closely to the car in front of him. You subsequently rear-end him and get injured. Who’s at fault for this accident?

The answer may be that both of you are to blame.

In many cases, people believe that if they rear-end someone else, they do not have a leg to stand on in court and that the insurance company sees little else. The truth is, people may still have legal grounds to sue even in rear-endings. For this example, the man was distracted driving and following too closely, therefore, he should be held partially liable for your injuries.

If you bring a lawsuit against that man, then the jury would compare both of your accounts and assign percentages between 0 and 100. Let’s say the jury decides that you are each 50 percent at fault for your portion of the accident. If you suffered $50,000 in damages (medical expenses, lost wages, pain and suffering, and so forth.), the judge would reduce that amount by 50 percent which means you are entitled to $25,000 now. While it is less than what you may have expected, it’s still a substantial sum and makes pursuing a claim worthwile.

If you were in an accident that you partially caused — but you believe the other person was not blameless either — then get in touch with a car accident lawyer as soon as possible.

There are a few very important things to remember, though:

If you have been injured in a car accident where the fault is in question, do not hesitate to contact us or call the St. Louis personal injury lawyers at Combs Law Group at (314) 900-HELP for a free, no-risk consultation. 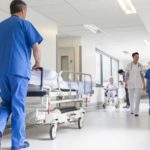